COEUR D’ALENE, Idaho, February 20, 2020 (ACCESSWIRE) — New Jersey Mining Company (OTCQB:NJMC/CSE:NJMC)(“NJMC” or the “Company”) is pleased to announce that it has acquired a strategic land package of approximately 368 acres of patented mining claims having both surface and mineral rights, and situated one mile (1.6 kilometers) west of its Golden Chest Mine.

NJMC’s VP of Exploration, Rob Morgan commented, “This land acquisition strategically connects New Jersey’s east and west holdings and is the culmination of a lengthy three-year base-building process in which we planned for success and consolidated the Murray Gold Belt (MGB). Along with the adjacent NJMC properties, this private land package provides an exclusive and exciting opportunity for gold exploration as it is underlain by favorable host rocks and is bisected by a gold-mineralizing fault. Additionally, our experience permitting, designing, constructing – and operating the New Jersey Mill on a daily basis – leads us to believe this property may contain terrain suitable for future tailings impoundment and/or a new mill for the Golden Chest Mine or other infrastructure related to mineral processing in the Murray area.” Figure 1 shows land ownership within the Murray Gold Belt; note the large positions held by NJMC and Hecla.

The Alder Gulch land was originally patented in the 1880’s due to its gold potential and has changed hands only a couple of times since Idaho statehood in 1890. It was held in the same family for nearly 100 years. Since the 1960’s at least three campaigns of mineral exploration by major companies have taken place in the Murray Gold Belt. Some of these majors included Newmont, Cominco, Kennecott, ASARCO and Hecla, however none of these companies had access to the closely held Alder Gulch land – thus the land remained largely unexplored for more than a century.

NJMC VP Rob Morgan added, “Our initial review of local geologic features suggests several promising prospects that support the gold potential of this land package. One such prospect is located on the Evans claim where a hydrothermally altered intrusive sill barely outcrops through the gravel cover. The sill contains disseminated pyrite and galena with numerous quartz vein stringers mineralized with chalcopyrite, galena and tellurides. Anomalous mineralization is found not only in the veins and veinlets, but also in the intrusive wallrock and in the surrounding sedimentary Prichard Formation host rocks.”

The presence of gold-tellurium mineralization is interesting as NJMC has experience with that type of mineralization from its work on the Toboggan Project (A select sample from this sill assayed 4.75 gpt gold, 15.65 gpt silver, 2.2 % lead and 7.96 ppm tellurium). NJMC believes that the occurrence of tellurium with gold in this sill is important because it indicates a potentially large alkalic intrusive is responsible for the gold mineralization. Another prospect known as the Gold Lady has exposed banded veins that assay from 3.00 to 10.45 gpt gold, similar to those seen at the Golden Chest Mine.  The assays above are from select grab samples and are not necessarily representative of the mineralization hosted on the property. 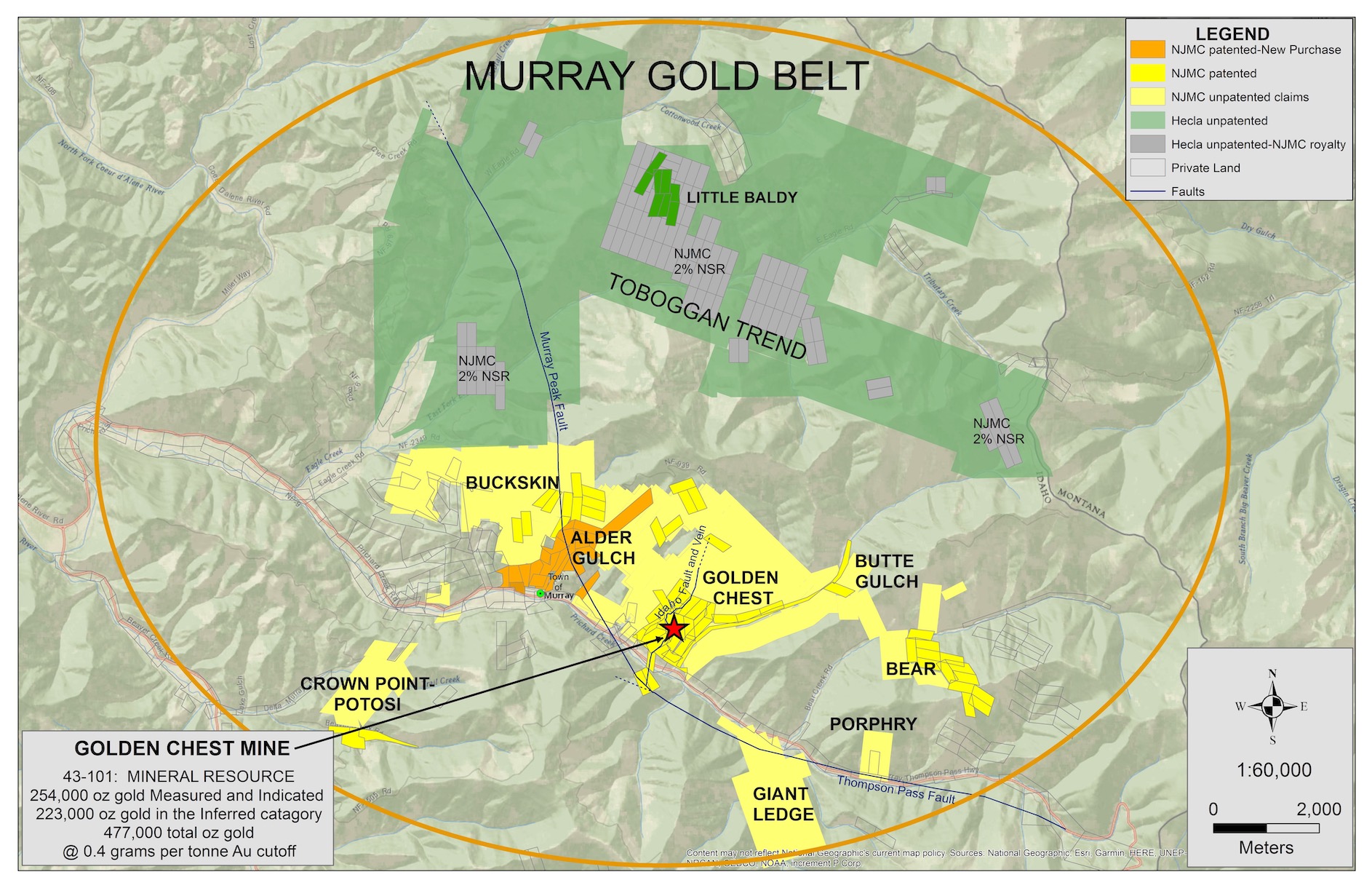 In addition to ownership challenges, historic exploration for gold vein lode deposits on the Alder Gulch land has been hampered due to a majority of the property’s bedrock being covered by a veneer of river gravels from an ancient stream. This old stream channel of auriferous gravels, and the original justification for granting of the patent, crosses the Alder Gulch land from the northeast to the southwest. Vein systems and north-south trending faults, like the aforementioned Murray Peak Fault, extend under this ancient stream channel from both sides. Mineralization on the NJMC-controlled Buckskin patented claims appears to extend south under the gravels of the newly purchased lands based on historical and recent observations. Similarly, the gold-telluride bearing sill on the Evans extends north and disappears under gravel cover. The application of modern geophysical exploration methods, especially magnetics, should reveal more information on the rocks and fault structures beneath the gravels and help target future drill programs.

No PEA, PF or FS has been completed to verify the economic viability or technical feasibility regarding any new construction of future tailings impoundment, a new mill or other infrastructure related to mineral processing in the Murray area.

The Company is seeking to amend the terms of 375,000 warrants issued in connection with a private placement completed in December 2018 such that the exercise price of the warrants will be expressed in US currency at US$$0.18.  Management and the Board have determined that for purposes of US GAAP it is preferable for the Company to have the exercise prices for its warrants to be expressed in US dollars.

New Jersey Mining Company is headquartered in North Idaho, where it is producing gold at its Golden Chest Mine. Gold was first discovered in the Murray Gold Belt in 1882, but by 1888 mining declined as the center of activity and demand for labor shifted to the Silver Valley following the discovery of the Bunker Hill, Sunshine, Lucky Friday, and other iconic regional mines. The rebirth of the long-forgotten Murray Gold Belt has been led by NJMC, as evidenced by production from open-pit and underground operations at the Golden Chest Mine, its extensive land package and superior knowledge of the district gained from current development and production, and ongoing exploration activities.

NJMC has established a high-quality, early to advanced-stage asset base in three historic mining districts of Idaho and Montana, which includes the currently producing Golden Chest Mine. The Company’s objective is to use its considerable in-house skill sets tobuild a portfolio of mining and milling operations, with a longer-term vision of becoming a mid-tier producer. Management is shareholder focused and owns more than 15-percent of NJMC stock.

The Company’s common stock trades on the OTC-QB and the CSE Market under the symbol “NJMC.”

This release contains “forward-looking statements” within the meaning of Section 27A of the Securities Act of 1933, as amended, and Section 21E of the Securities Exchange Act of 1934, as amended that are intended to be covered by the safe harbor created by such sections. Such statements are based on good faith assumptions that New Jersey Mining Company believes are reasonable, but which are subject to a wide range of uncertainties and business risks that could cause actual results to differ materially from future results expressed, projected or implied by such forward-looking statements. Such factors include, among others, the Company’s ability to identify additional resource or construct a mill near the Golden Chest Mine, the risk that the mine plan changes due to rising costs or other operational details, an increased risk associated with production activities occurring without completion of a feasibility study of mineral reserves demonstrating economic and technical viability, the risks and hazards inherent in the mining business (including risks inherent in developing mining projects, environmental hazards, industrial accidents, weather or geologically related conditions), changes in the market prices of gold and silver and the potential impact on revenues from changes in the market price of gold and cash costs, a sustained lower price environment, as well as other uncertainties and risk factors. Actual results, developments and timetables could vary significantly from the estimates presented. Readers are cautioned not to put undue reliance on forward-looking statements. NJMC disclaims any intent or obligation to update publicly such forward-looking statements, whether as a result of new information, future events or otherwise