Idaho Strategic Resources’ 100% owned and producing Golden Chest Gold Mine is located in northern Idaho approximately 45 miles east of the company’s headquarters in Coeur d’Alene, Idaho. The Golden Chest Mine is currently the only producing hard-rock gold mine in Idaho. It lies within the Murray Gold Belt. The Murray Gold Belt is north of the renowned silver belt deposits of the Coeur d’Alene Mining District. Idaho Strategic Resources (IDR) recently consolidated the many historic gold mines, and prospects within the Murray Gold Belt to form an impressive land package consisting of 1,500 patented mining claims and 5,800 unpatented claims.

In 2012, Golden Chest LLC commissioned a NI 43-101 Technical Report that includes an overall mineral resource of 477,000 oz- 254,000 oz gold for the Measured and Indicated categories respectively, and 223,000 oz in the Inferred category with a 0.4 grams per-tonne (gpt) gold grade cut-off. The Golden Chest is an orogenic, or igneous related, gold deposit. At the Golden Chest this type of deposit manifests itself as six individual shoots, which are identified as: the Katie Dora, Klondike, Golden Chest, Skookum, Paymaster, and Joe Dandy (as seen in the long section photo below). To date, all shoots remain open at depth and are believed to be comparable to the Coeur d’Alene silver deposits, which have vertical extents greater than 8,000 feet.

Over the life of the Idaho Pit, which ended production in 2020, the pit produced 121,300 metric tonnes (mt) with an average gold grade of 3.12 grams per tonne (gpt), yielding a total of 12,160 ounces of gold. Additionally, 101,700 tonnes of mineralized material with a gold grade of 1.09 gpt was stockpiled for future processing. A total of 713,400 tonnes of waste was also mined. The Idaho Pit, with its vertical extent of 150 meters, proved successful as a source of cash flow for the restart of underground production; and remains a potential future source for cash flow and gold production should gold prices reach sufficient levels.

Due to the success of the Idaho Pit, Idaho Strategic Resources made the decision in 2020 to begin gold production from a second open pit; the Klondike Pit, which is the surface outcropping of the Klondike ore shoot. To date, the Klondike Pit has produced 40,000 mt at an average gold grade of 4.0 gpt. An additional 7,000 tonnes of mineralized material was stockpiled, and a total of 340,000 tonnes of waste was mined. The Klondike Pit is currently in production, which is expected to end in early 2022, coinciding with our planned expansion of underground production and development of new potential stoping areas. 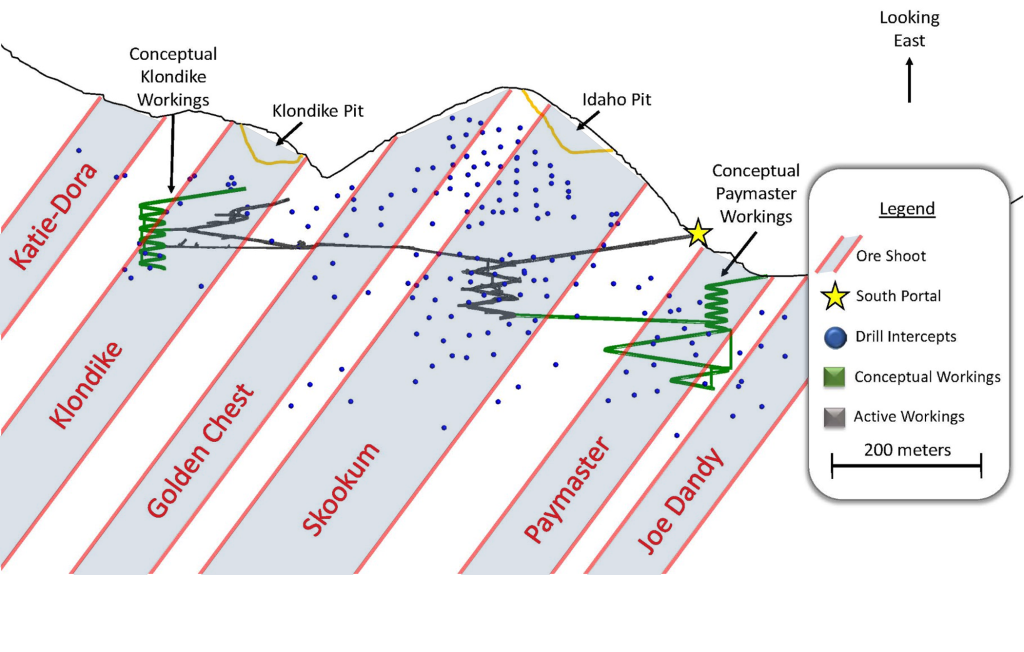 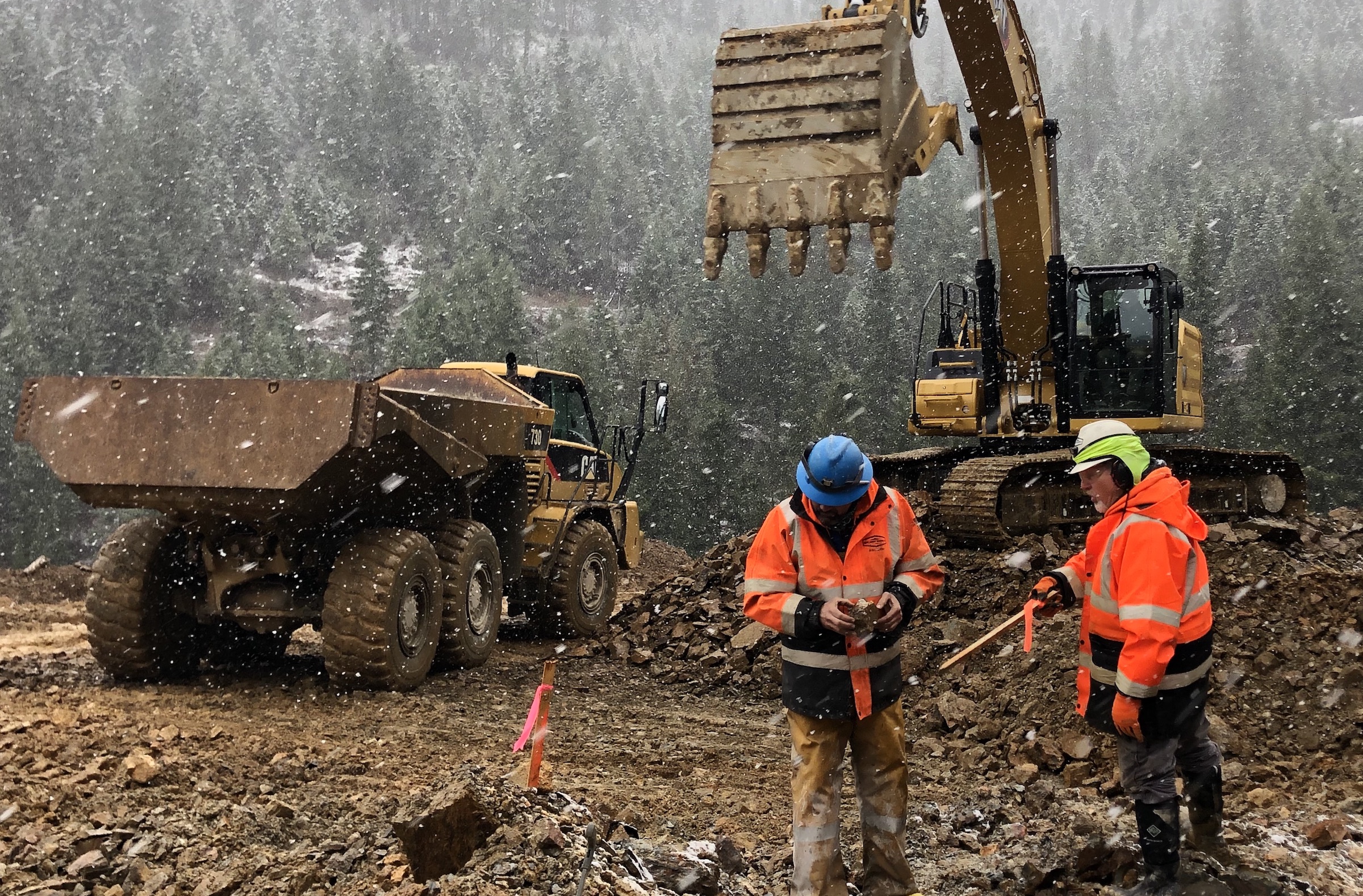 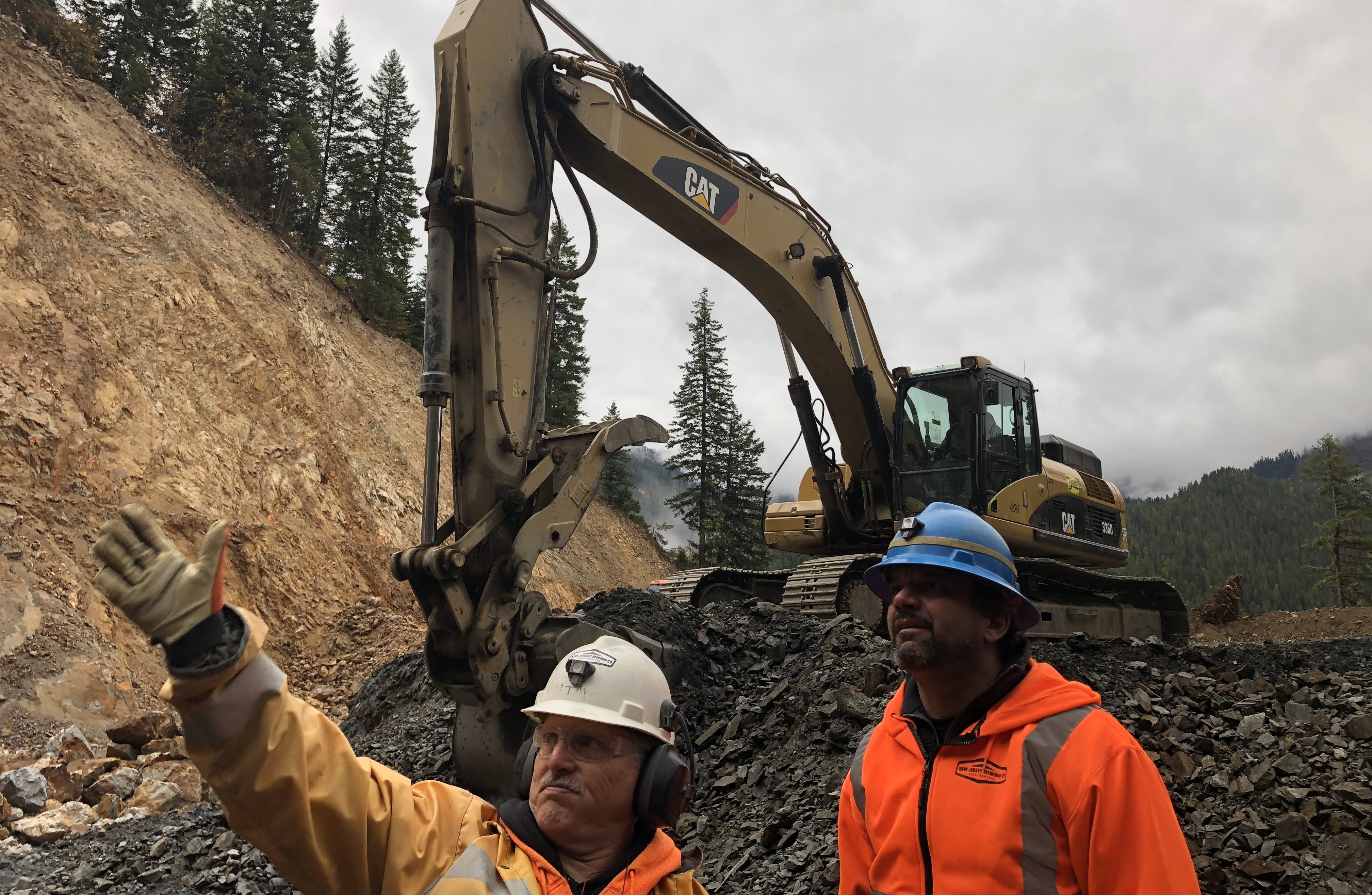 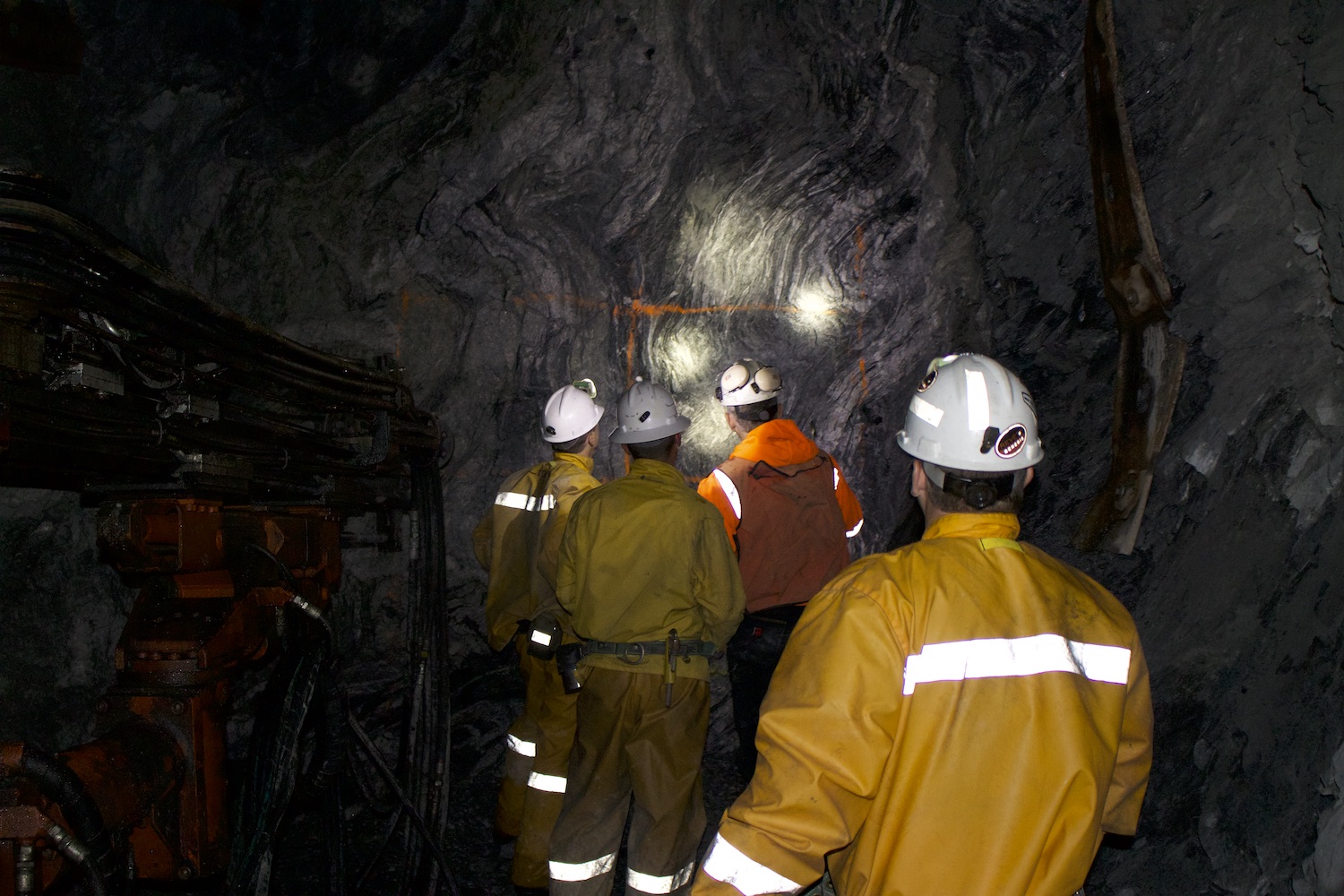 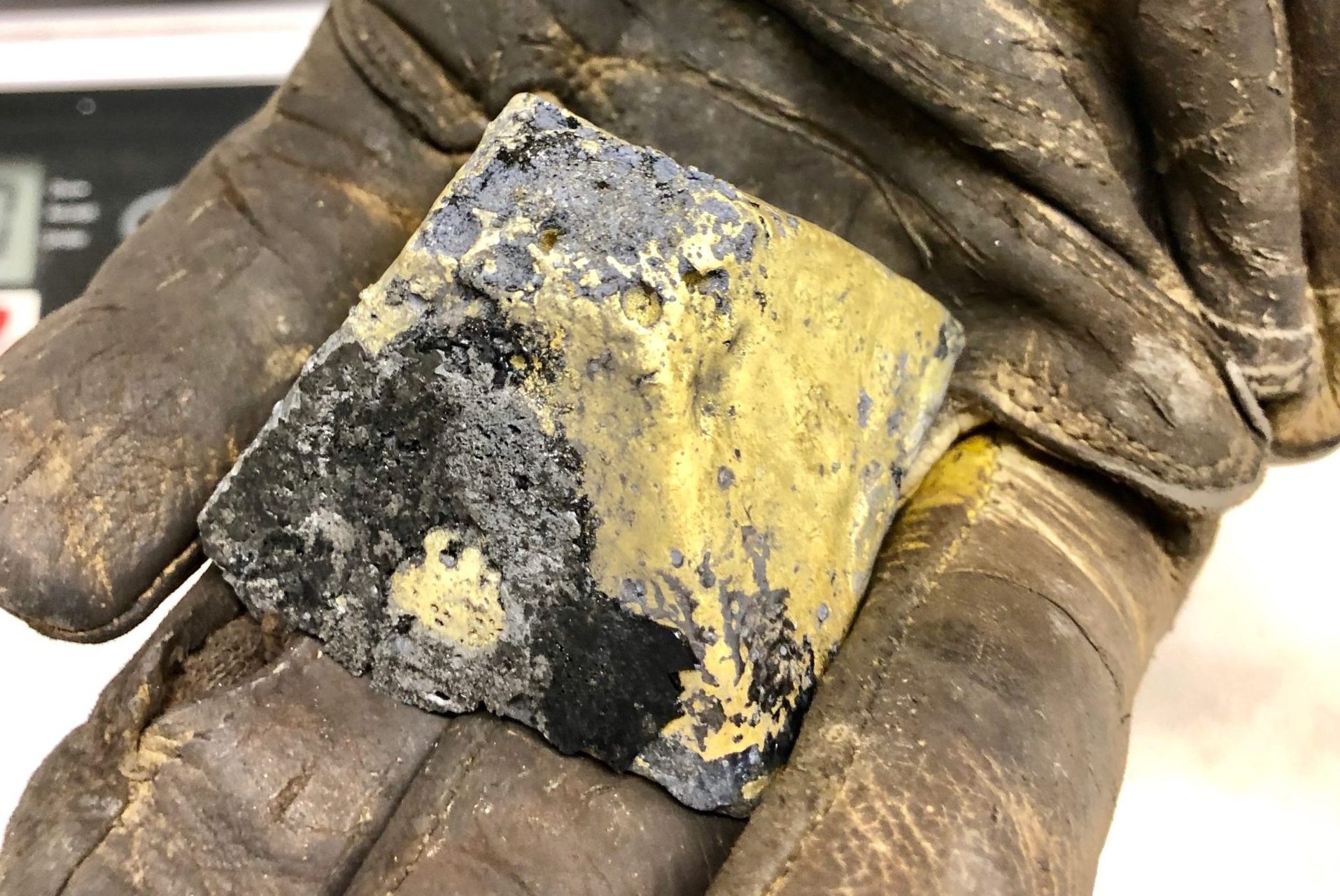 In late 2016, IDR began underground mining operations from the Skookum shoot at the Golden Chest Mine. Idaho Strategic Resources is currently in the process of expansion plans to increase underground gold production to 20,000 – 25,000 oz annually at the Golden Chest Mine. These expansion plans are intended to be completed within the next 2 years and include further mining and development of the Skookum shoot, as well as underground expansion into the Klondike and Paymaster shoots.

IDR believes that recent high grade drill results from both the Klondike and Paymaster shoots have identified potential for production from all three shoots simultaneously (current underground Skookum workings in grey color, and Klondike and Paymaster conceptual underground workings in green in the long section figure to the left). The goal of our current drilling program is to define a resource that provides a 10-year mine life at 20,000-25,000 oz per year within the next two years. Recent drilling results are on track to achieving this goal.

The Golden Chest Mine expansion plan also includes the construction of a new 400 tonne per day (tpd) mill with expansion potential up to 1,000 tpd, a paste backfill plant, and a tailings facility. Our plan is estimated to take approximately 2 years to complete from its initial start date. IDR believes the added flexibility of a new mill and on-site facilities at the Golden Chest makes financial sense, as well as adding strategic value to future exploration and development of new mines within the Murray Gold Belt.