Placer and lode gold was discovered in the Murray area (Murray Gold Belt – MGB) in 1883 leading to the creation of the World-Class Coeur d’Alene Mining District. By the early 1890’s, the main mining emphasis had switched to the large lead-silver mines along the South Fork of the Coeur d’Alene River, leaving the MGB largely forgotten. While the district was active, the main mines were either gold or silver-base metal, with gold predominating. The company’s Golden Chest Mine was the largest gold mine, by production and size, in the district. A small amount of lode exploration (both gold and silver/base metals) occurred in the MGB until the later part of the twentieth century when mining companies such as Newmont, Cominco, ASARCO, as well as several smaller companies, were active in the area.

Idaho Strategic is currently producing gold from the Golden Chest Mine and has consolidated the Murray Gold Belt for the first time in over 100 years. IDR’s land package consists of 1,500 acres of patented land and 5,800 acres of unpatented land. This overall land package contains numerous historic mines such as the Giant Ledge, Goldback, Buckskin, and King mines, as well as more recent prospects such as the Evans and Argus. Recent work by IDR on the newest patented land purchases north and west of Murray have exposed gold in veins related to igneous activity, with some assays ranging from 5 to 75 gpt Au.  Much field work remains to further define these mineralized areas and the company plans to start advancing these properties in 2022 via additional property-wide prospecting and trenching, followed by drilling of the most prospective targets. 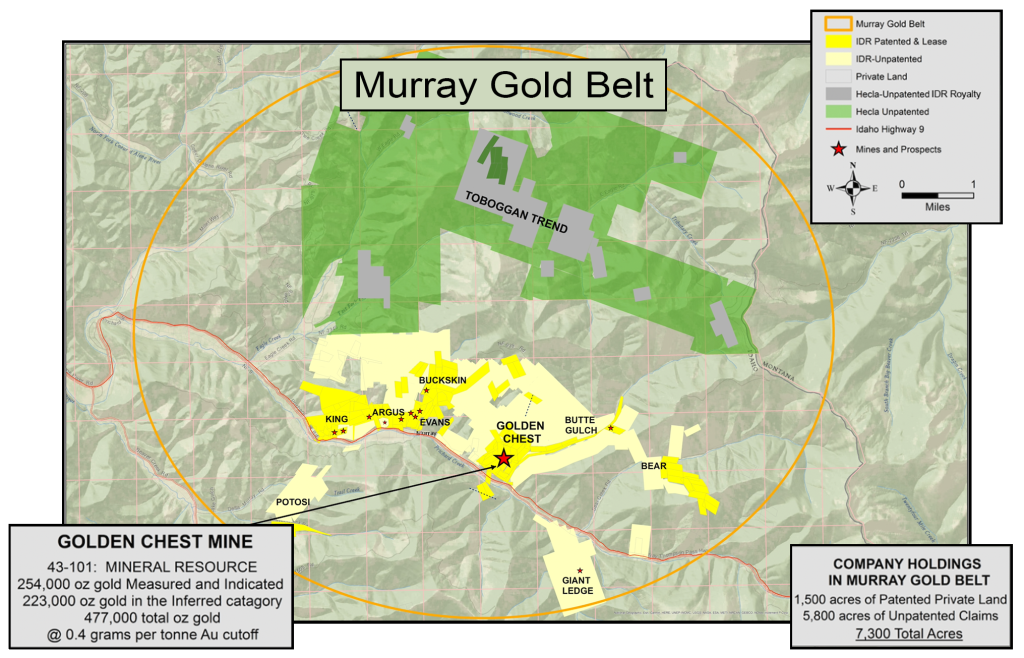