New Jersey Mining Co. Acquires Large Patented Land Package in the Murray Gold Belt. Now Owns Over 1,500 acres of Private Land in Addition to its 5,700 acres of Unpatented Land in the area

COEUR D’ALENE, Idaho, April 19, 2021 (ACCESSWIRE) — New Jersey Mining Company (OTCQB: NJMC)(“NJMC” or the “Company”) is pleased to announce the acquisition of more than 500 acres of private patented mining claims for $1,699,000. This claim group consists of 28 patented mining claims and is contiguous with other lands owned by the Company, bringing NJMC’s private land holdings in the Murray Gold Belt to over 1,500 acres. New Jersey Mining Company is now the largest private landowner in this historic mining district.

NJMC’s VP of Exploration, Rob Morgan commented, “This land acquisition strategically connects New Jersey’s east and west holdings and is the culmination of a four-year process to consolidate the Murray Gold Belt. This private land package provides a unique and exciting opportunity for gold exploration, responsible development, and future conservation.  We believe the Murray Gold Belt contains one of the last great undeveloped patented land packages in the western US. It’s every mining company’s dream to have a private land package of this magnitude; especially in an active mining district.”

NJMC CEO and President, John Swallow added, “The flexibility and leverage provided by this acquisition cannot be overstated. In addition to a producing gold mine, our overall property package now provides considerable exposure to both lode and placer gold exploration, possible new mill and/or tailings location(s) and the potential for commercial aggregate deposits. This large block of land also fits nicely into our “We Live Here” approach toward land conservation, responsible coexistence of multiple land uses and future carbon footprint reduction efforts. In short, this land package largely completes a community-focused land acquisition plan for the MGB we put in place many, many years ago. Idaho is home – we live here, work here and once again demonstrate that we care deeply about our local history, economy and future.”

The Murray Gold Belt (MGB) is the birthplace of the Coeur d’Alene Mining District and marks the site of one of the last true gold rushes in the lower 48 of the United States. The Coeur d’Alene Gold Rush of 1883 resulted after gold was discovered along Prichard Creek, near present day Murray. Thousands of miners flocked to the area, between 1884 and 1905, to produce a total of 227,890 ounces of gold from the area’s stream placers, terrace gravels, and hard rock vein deposits. Over the last four years, the Company has purchased and put together a substantial private land package consisting of mining patents dating to the Coeur d’Alene Gold Rush of 1883. NJMC now owns a substantial portion of holdings originally assembled in the early 1900’s from hundreds of owners, that was later controlled by members related to the Guggenheim family for over 100 years.

Mr. Morgan continued, “Ground magnetic geophysical surveys have been conducted over our previously acquired Alder Gulch lands with great success. These surveys will be extended to cover the new area in order to facilitate the targeting of structural intersections and potential gold deposits beneath the gravels. Our land package hosts a ‘target-rich environment’, and we anticipate mobilizing our drill rig into the area following mapping, sampling, trenching and geologic interpretation, which is underway.”

The Company targeted these lands because of large-scale faults and the associated hard rock gold-quartz vein occurrences. It also includes many historic gold mines and prospects such as the Golden King, Grouse, and McComber Gulch. Many of the known gold-bearing structures are projected to intersect within this new property package. Additionally, a considerable amount of the new area is covered by an ancient gold-bearing gravel veneer which the Company believes veils potential ore deposits hidden beneath. The Company has recently completed a LIDAR (Light Detection and Ranging) remote sensing survey to produce a detailed 1-meter topographic map over its entire holdings. This mapping is used to help locate collapsed or unknown historic tunnels, trenches and prospects; as well as documenting historic scarps created by hydraulic mining. 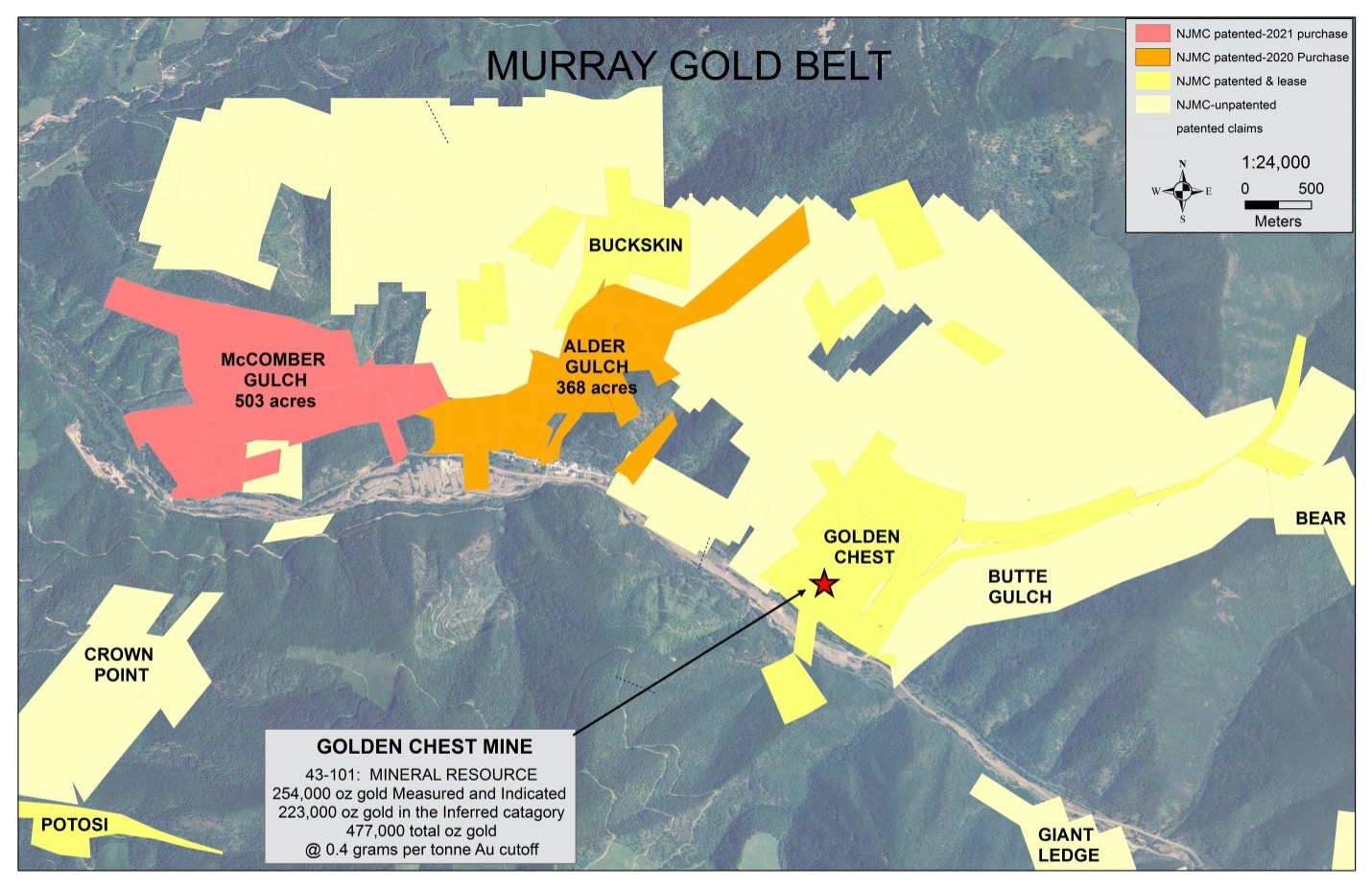 Headquartered in North Idaho, New Jersey Mining Company is the rare example of a vertically integrated, operating junior mining company. NJMC produces gold at the Golden Chest Mine and recently consolidated the Murray Gold Belt (MGB) for the first time in over 100-years. The MGB is an overlooked gold producing region within the Coeur d’Alene Mining District, located north of the prolific Silver Valley. In addition to gold, the Company maintains a presence in the Critical Minerals sector and is focused on identifying and exploring for Critical Minerals (Rare Earth Minerals) important to our country’s defensive readiness and a low-carbon future.

New Jersey Mining Company possesses the in-house skillsets of a much larger company while enjoying the flexibility of a smaller and more entrepreneurial corporate structure. Its production-based strategy, by design, provides the flexibility to advance the Murray Gold Belt and/or its Critical Minerals holdings on its own or with a strategic partner in a manner that is consistent with its existing philosophy and culture.

NJMC has established a high-quality, early to advanced-stage asset base in four historic mining districts of Idaho and Montana, which includes the currently producing Golden Chest Mine. Management is stakeholder focused and owns more than 15-percent of NJMC stock.

The Company’s common stock trades on the OTC-QB under the symbol “NJMC.”

For more information on New Jersey Mining Company go to www.newjerseymining.com or call:

This release contains “forward-looking statements” within the meaning of Section 27A of the Securities Act of 1933, as amended, and Section 21E of the Securities Exchange Act of 1934, as amended that are intended to be covered by the safe harbor created by such sections. Such statements are based on good faith assumptions that New Jersey Mining Company believes are reasonable, but which are subject to a wide range of uncertainties and business risks that could cause actual results to differ materially from future results expressed, projected or implied by such forward-looking statements. Such factors include, among others, the Company’s ability to identify additional resource or construct a mill near the Golden Chest Mine, the risk that the mine plan changes due to rising costs or other operational details, an increased risk associated with production activities occurring without completion of a feasibility study of mineral reserves demonstrating economic and technical viability, the risks and hazards inherent in the mining business (including risks inherent in developing mining projects, environmental hazards, industrial accidents, weather or geologically related conditions), changes in the market prices of gold and silver and the potential impact on revenues from changes in the market price of gold and cash costs, a sustained lower price environment, as well as other uncertainties and risk factors. Actual results, developments and timetables could vary significantly from the estimates presented. Readers are cautioned not to put undue reliance on forward-looking statements. NJMC disclaims any intent or obligation to update publicly such forward-looking statements, whether as a result of new information, future events or otherwise